Two and a half months ago, asked by award-winning playwright Lin-Manuel Miranda about imprisoned Puerto Rican nationalist Oscar López Rivera – whose only crime, according to Nobel Peace Laureate Archbishop Desmond Tutu, is “conspiracy to free his people from the shackles of imperial justice” – President Barack Obama told the Hamilton creator that he “had [the case] on his desk”.

Miranda, whose parents hail from Puerto Rico, used his invitation to the White House to bring up the issue of López Rivera’s continued incarceration, which is of tremendous importance to Puerto Ricans. Both on the island and in the diaspora, freedom for the 73-year-old political prisoner enjoys overwhelming popular support and has united people across the political spectrum.

“With Obama in the Justice Department you can’t use alternate mechanisms, different democratic ways, they slam the door in your face, there’s a bureaucracy that didn’t exist with President Clinton”, said Luís Gutiérrrez in an interview with Puerto Rican newspaper Claridad. With indignation, determination and hope, he fights for freedom for Oscar López Rivera.

According to Gutiérrez, the White House is much less receptive now than back in 1999, when a successful campaign was carried out to release 11 of López Rivera’s comrades. He recounts that under Bill Clinton’s presidency, the message about Puerto Rican prisoners could be taken up to his main legal advisers, Charles Ruff and Eric Holder, and even to President Clinton himself, who showed interest in the subject.

“You could go to Eric Holder, who was later appointed as Secretary of Justice, and have a chat. It’s noteworthy that when he was nominated by Obama, republicans held the pardon as against him”, the Congressman says. And so, when he was appointed as Obama’s first Secretary of Justice, the Justice Department team and the White House decided to end with those kinds of pardons.

Gutiérrez, who has been in Congress for 13 years and is now running for a re-election in the upcoming electoral process, emphasized that it’s crucial for Puerto Rico to be united in the claim for the pardon of Oscar López Rivera, so that the request can reach the President, “because he is in charge of making decisions”.

He says that his focus is not set on getting members of Congress to solve the issue “because I don’t expect, and we mustn’t expect, some Representatives to have enough influence to pick up the phone and call Obama, even though there are Representatives with us”. Yet Gutiérrez managed, last January, to get the Hispanic Caucus of the Congress to send a letter to Obama where they expressed their support to the cause of Oscar López Rivera’s freedom.

The US White House has also prevented the topic of the pardon from being discussed during the debate on the bill known as PROMESA (Puerto Rico Oversight, Management, and Economic Stability Act, which will impose a Fiscal Control Board on the island-country.

Gutiérrez recounted that during the debate over the bill, all Puerto Rican representatives were cited in the White House, to get them on board with the project.

Although Gutiérrez is firmly against it, he personally went to tell the President that he had sent him a letter regarding López Rivera 5 months before.

Once the meeting was over, Gutiérrez questioned Obama about Oscar’s case, quoting his response to Lin-Manuel Miranda, to which the President replied that “Oscar’s papers aren’t on his desk and that he (Gutiérrez) should know that there are certain procedures that must be followed”. What the President meant, Gutiérrez says, is that “the paper’s aren’t on his desk because they are caught up in the bureaucracy of the Justice Department”.

But this is not a reasonable explanation. As President Obama needs not wait until the documents on the case reach his desk because the US Constitution grants him absolute power to concede pardons, bypassing the usual procedures.

After the meeting with the President, Gutiérrez wrote to the General Prosecutor, Sally Yates, asking her for a meeting to discuss López Rivera’s case. To this date, he hasn’t heard back from her.

Given this situation, the Puerto Rican Congressman exhorted all Puerto Ricans and the United States to keep fighting for this man who has spent 35 years in prison —12 of them in solitary confinement. And he remarked that the great efforts that are being carried out on the island need to be replicated in Washington in order for the claim to be addressed by the US government. For this reason he made a calling to attend the protest that is scheduled for October 9 on Lafayette Square, in Washington DC.

This protest is being convened by the Coalition for Oscar López Rivera, which brings together a vast spectrum of political, social, cultural, labour and professional organizations of Puerto Rico and the US. They consider this demonstration to be key in the process to achieve the pardon for the political prisoner because if Obama doesn’t release him, neither will the next US President.

“We need a coalition because we need unity. The freedom of Oscar López Rivera is not only in the hands of independentists —it is the duty and the responsibility of all defenders of democracy and human rights”.

As the economic and humanitarian crisis has worsened in Puerto Rico in recent months, playwright and actor Lin-Manuel Miranda, has given voice in interviews and Op-Eds to the severity of the crisis among ordinary Puerto Ricans. Miranda called the island’s debt crisis a matter of “life and death,” saying, “I have a lot of family who are struggling in Puerto Rico, that’s not an abstract issue to me.”

He humanizes what the statistics – $73 billion in debt, $19,500 median household income, 11.5 percent sales tax, 64,000 people leaving per year – can not. Puerto Rico is a debt colony whose function as a political entity is to service its creditors.

Ironically, Miranda achieved the celebrity he’s now using to advocate for the Puerto Rican people by glorifying and aggrandizing the most ruthless champion of creditors in American history.

Miranda has become an elite pop-culture sensation as the creator and star of the award-winning and immensely popular Broadway play Hamilton. The hip-hop musical has been as successful with critics as it has with Broadway theatergoers, dominating the Tony awards and selling out months in advance. The Harvard Business Review argues its $849 tickets are priced too low.

The show’s namesake is, 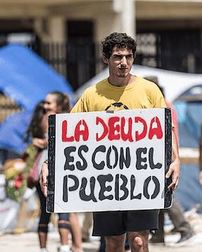 Frustrated by the results of the Spanish-American War in 1898, Ramón Emeterio Betances – father of the Puerto Rican Independence movement and an Antillean leader – asked: “What’s wrong with Puerto Ricans that they haven’t rebelled yet?”

The question has been frequently evoked with equal frustration and indignation whenever political struggles and protests fail to rally islanders to their cause. Upon returning to the Island this summer, I was impressed by citizens’ complacency despite the proclaimed dissatisfaction with the current administration, the economy and the deteriorating quality of life. Now more than ever – with the signing of the PROMESA (Puerto Rico Oversight, Management and Economic Stability Act) and the imposition of the Board for Fiscal Oversight (or Junta) – Puerto Ricans, on the island and abroad, have more than enough reason to demand social justice for their country. But, why aren’t more doing so?

Puerto Ricans on the whole are deeply concerned for the wellbeing of their people. While small groups have shown their discontent through protests and rallies, apathy seems to still haunts the Island during these trying times. The differences between groups, the disinformation among the populace and the lack of political recourse or social mechanisms available to effect change seems to stymie broader mobilization.

For months, Puerto Ricans debated whether Congress would take up PROMESA, if it would actually pass, and what would that mean for the Island. After local primaries where held in June, I created a Twitter account (@ruisenorcalle) to compile comments made by everyday Puerto Ricans and gage the social temperature.

I found that most Puerto Ricans saw the coming of the Junta and PROMESA as a form of accountability: there is hope that federal agents will bring corrupt politicians to justice and halt fraudulent government activities. Local politicians are perceived as “uncontrollable” crooks who answer to no one, and the U.S. presence seen as mandated to rein in these almost despotic politicians.

Meanwhile, many of my compatriots believe the Junta will defend Puerto Rico from vulture hedge funds while working to improve the Island’s economy. Admittedly, many of those who spoke about the Junta have not read the bill and do not understand what the board aims to accomplish on the Island. Debates on the Junta take place in the media, but few manage to inform about all of its clauses and to engage in a profound debate about effects and its meaning for US-PR political relations.

It didn’t help that the U.S. Congress and key local media outlets failed to provide a Spanish translation, though a translator recently voluntarily made one available. As a result, the aforementioned ground level discourse on the Junta often lacks concrete information. While general discontent with local government, the Commonwealth status, and the present state of the economy run as high as tropical summer heat, social temperatures remain low as the crisis deepens and many Puerto Ricans continue leave.

Puerto Rico’s woes go beyond PROMESA, as the standard of living on the island has been declining and the cost of living increased tremendously. Puerto Ricans are faced with a 11.5 percent sales tax, an 11.7 percent unemployment rate, a 45 percent poverty rate, and a fast shrinking economy and population.

Why is the Dominican Republic Deporting
Its Haitian Residents?
Javiera Alarcon - Counterpunch
April 5, 2016​

Directed by the ruthless Dominican dictator Rafael Trujillo, soldiers rounded up thousands of people along the Dominican Republic’s borderlands with Haiti, demanding that they identify a sprig of parsley. The story goes that when French- and Creole-speaking Haitians failed to mimic the Spanish pronunciation, perejil, they were murdered. Estimates of the number killed range as high as 20,000 to 30,000.


The 1937 massacre is a haunting flashpoint in a long tradition of anti-Haitian politics — anti-haitanismo — on the eastern half of the island shared by the two countries. Now there’s a different kind of test for Dominicans of Haitian descent. And the price for failure is deportation.


It began in 2013, when a Dominican court ruling stripped up to 200,000 Haitian immigrants and their descendants of their Dominican citizenship — a stunning and unprecedented reversal of the country’s normal rules allowing birthright citizenship. Thousands of Dominicans were put at risk of being deported to Haiti, where many also lack citizenship.