On the September 11, 2016 ceremony President Barack Obama remembered and honoured the victims of terrorism. However, what was the position of Obama when he visited the Moneda in 2011?

Chile was the second leg (after Brazil) of Obama’s March 2011 trip to Latin America. For the vast majority of people in Latin America, as well as many in North America and Europe, Chile invokes the atrocious event of September 11, 1973: the U.S.-organized military coup d’état. It was directed against the democratically elected socialist government of Salvador Allende. Resulting from the coup, tens of thousands of people were imprisoned, tortured, killed, forced into exile or disappeared. All left-wing socialist and communist organizations were violently suppressed. Allende, one of the icons of Latin American socialist and revolutionary personalities, himself died on that day in the Moneda Palace (government building).

On March 21, 2011, in the Moneda, Obama, along with his host, Chilean President Sebastián Piñera, addressed invited guests and some journalists in a press conference. In his opening remarks, Obama did not refer to the 1973 military coup nor, of course, to U.S. responsibility, but he did mention that Chile has “built a robust democracy.” The first question asked by a journalist addressing Obama, despite his comments about transition to democracy, was

“In Chile … there are some open wounds of the dictatorship of General Pinochet. And so in that sense, leaders, political leaders, leaders of the world, of human rights, even MPs … have said that many of those wounds have to do with the United States.… In that new speech … do you include that the U.S. is willing to collaborate with those judicial investigations, even that the United States is willing to ask for forgiveness for what it did in those very difficult years in the ’70s in Chile?”

Obama, the same person who wrote and spoke on several occasions, quoting or paraphrasing William Faulkner, “The Past Isn’t Dead and Buried,”, did not mention the 1973 coup in his opening remarks. In response to the correspondent’s question, he referred to the coup only as evidence of an “extremely rocky” relationship between the U.S. and Chile. This was followed by his statement that we should not be “trapped by our history,” that he “can’t speak to all of the policies of the past,” and repeated once again the importance of “understand[ing] our history, but not be[ing] trapped by it.”

In the same vein of avoiding the role of the U.S. in the 1973 coup, during another address in the Moneda several hours later, he was forced to make a vague reference to it. He referred to the Moneda where “Chile lost its democracy decades ago.” He also made a frontal attack on Cuba. He ignored the U.S. anticommunist orientation that motivated the 1973 coup against the Allende socialist government supported by the Chilean communists. Cuba and Chile while being led by Allende had very fraternal, mutual relationships. Nevertheless, Obama vowed, “support for the rights of people to determine their own future — and, yes, that includes the people of Cuba.”

People should not be surprised by Obama’s selective use of history regarding the 1973 coup in Chile. Obama notified in his second book, to those who were interested to know, where he stands on the issue of military coups versus progressive or socialist thought and action. He wrote,

“But at times, in arguments with some of my friends on the left, I would find myself in the curious position of defending aspects of Reagan’s worldview.  I didn’t understand why, for example, progressives should be less concerned about oppression behind the Iron Curtain than they were about brutality in Chile.”

It is important for people to reflect seriously upon Obama’s manipulation of history and political content that is embedded in his use of the past. Together, they form the manner in which Obama and the U.S.-type of multi-party, competitive democracy use selective history with the goal of distancing themselves (in the case of Obama) from the previous administrations and, indeed, the entire history of U.S. military interventions in the hemisphere. This process is carried out in order to provide a “new face” to U.S. intrusion. This course of action even goes so far as to co-opt opposition to the decades-long U.S. policy so that this resistance applauds the new U.S. image under Obama. He goes to the Moneda, where the U.S. was responsible for the death of Allende. Obama uses the hostility against the U.S.-organized coup and the pro-Allende sentiment. He does so by attempting to convert the resentment in favour of the U.S. by giving the impression that Washington is turning the page on its aggressive interference and thus the Chilean people can rely on him.

We recall, as mentioned above, Obama’s comment in his second book regarding his frustration about progressives and the left standing up against the coup in Chile. He juxtaposed this progressive political tendency to repression behind the Iron Curtain. Obama’s view on the Iron Curtain versus Chile reflects a very important traditional stance of U.S.-foreign policy. Irrespective of what opinion one has about the former U.S.S.R. and Eastern Europe of the 1970s and 1980s, what has been the age-long policy of the U.S. since the 1917 October Revolution? The course of action has been to support anything that opposes socialist, progressive and revolutionary ideas and actions. Taking the twentieth century alone, there was the initial support for the fascists in Germany and Italy leading up to World War II (because it had in its cross hairs the U.S.S.R.). There were also the innumerable, bloody undertakings in Latin America throughout the century (El Salvador, Guatemala, Cuba, Nicaragua, Brazil, Grenada, etc.). It is well known with whom the U.S. has always sided and against which forces it fought.

What remains a problem to be solved is that many people still turn a blind eye to Obama’s writing and utterances, a haziness caused by the U.S.-centric, prejudiced faith in the legend that the U.S. presidential two-party system can really compete between programs of “change” and “status quo.”

Bachelet’s ratings have been affected by recent demands for pension system reform and massive student protests for free education.The approval rating of Chile’s president, Michelle Bachelet, is at its lowest level ever with only 19 percent of those surveyed saying they support her, according to a poll published on Friday.

According to the consulting firm Adimark, this is the lowest rate during her two terms in office.

The head of state has been affected by big protests to reform the pension system in the country, as well as marches by students to demand free higher education, according to the survey.
Bachelet is carrying out several reforms to change the educational system in the country, the tax system and the constitution, all inherited from the dictatorship of Augusto Pinochet.

The survey, which is taken monthly to assess Bachelet's government since her first term in 2006, also indicated a significant drop in popularity for the Chilean government as a whole. According to the firm, the decline in approval is more dramatic among middle- and lower-income voters.

Friday’s survey was conducted between Aug. 9 and 26, and included 79,000 telephone interviews with those age 18 and older.

“Chile is Better Without the TPP” demanded freedom for Julian Assange
Rebelion.org / The Dawn News / August 17, 2016

The organization “Chile is Better Without the TPP” which gathers more than 100 social, environmental, unionist and political organizations united to defend the right to Freedom of Speech, have joined the worldwide campaign for the freedom of the Australian cyber activist, Julian Assange.

Last July was the 4-year anniversary since the founder and director of Wikileaks exiled to the Ecuadorian Embassy, where he has lived ever since in order to avoid being detained, transported to Sweden and extradited to the US. In February 2016, a team belonging to the United Nations Working Group on Arbitrary Detentions absolved Assange after analyzing the case, which has no ongoing trial.

This is related to the accusations of sexual assault that Assange denies. The States involved have not fulfilled the order. Sweden has refused to question Assange in their Embassy, which a procedure that has been used in other cases.

According to Wikileaks this is related to an armed maneuver by the US to punish the cyber activist for sharing the truth about the tortures carried out by the US Army to their prisoners in Abu Ghraib, Iraq, as well as the true nature of the TPP, the TTIP and the TISA, among other secretes of the North American country.

As we all know, in Chile the TPP only became known to the public in November 2015 when the negotiation had already concluded. It was only because of Wikileaks that in 2013 the citizens learned for the first time about the chapter regarding “Intellectual Property”. Thanks to this, citizens knew it was important for the negotiations not to be carried behind their backs.

Today, the reasons why governments have hidden the serious impacts of this treaty are clearer than ever and the task of organizing ourselves to stop the signing of the TPP is urgent. Demanding Julian Assange’s freedom is a claim consistent with our own struggle to demand the end of secrecy and that treaties such as TISA are never again negotiated behind the backs of the people and social organizations.

Julian Assange has recently participated in a debate via livestreaming on the 60th Anniversary of Chile’s Journalism School, which is a member of the “Chile is Better Without the TPP” organization.

There, Assange warned against the TPP and explained how this treaty codifies the laws of intellectual property to manipulate them so that they enable control of information and monopoly of labels by the internet and transnational companies, at a global scale, obstructing the independent investigation and promoting companies’ espionage to people by the large powers.

He also affirmed that the TPP, the TTIP and the TISA involve different areas of the world but exclude China and other countries of the BRIC (India and Brazil), generating a strategic triangle that seeks to create a new legal regime of global operation, much more powerful than just military power.

“Chile is Better Without the TPP” has united in one voice the cry of communicators, human rights, legal, union and social organizations of Latin America and the world to demand Julian Assange’s freedom. 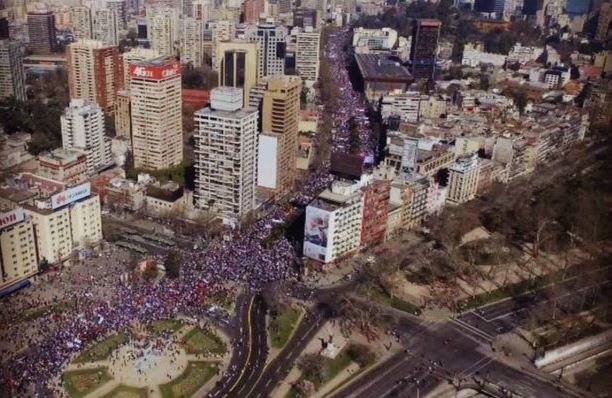 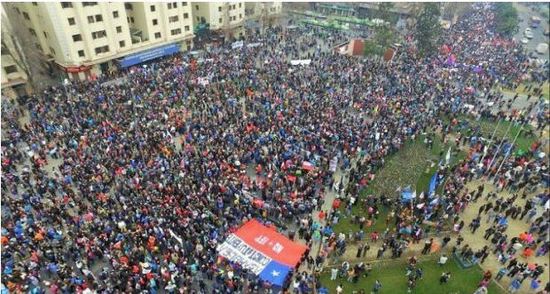 
My name is Jorge Hurtado I am in house legal counsel at UNITE HERE Local 75 and a member of the Latin American Trade Unionists' Coalition ("LATUC" website: www.latuc.ca) . I am also a member of the Canadian Association of Labour Lawyers ("CALL").

I have just been informed by the CONFEMIN (Confederation Minera) in Chile that the trade union representing miners at  REDPATH CHILENA S.A. have gone on strike at the Pascua Lama mine in Chile for better salaries.

For those that don't know RedPath is a subsidiary of Barrick Gold, a Canadian mining company. The workers at RedPath I am told have occupied parts of the mine as part of their strike.

CONFEMIN has a good relationship with Canadian trade unionists (USWA, LATUC) and are actively working to support the strikers.

They need our support. Please circulate the information below.  I  can draft a letter of support for the strikers that we can present to Barrick Gold. If you are interested in assisting in both the preparation of the letter and supporting the initiative please contact me.