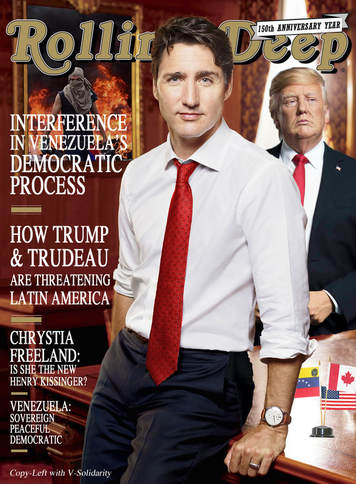 
We are [I am] outraged by the position the Trudeau government has taken with regard to the escalating conflict in Venezuela. Once again the government has condemned Venezuelan President Nicolás Maduro, expressing serious concerns over the government’s plan for a Constituent Assembly, saying it’s “contrary to Venezuela’s Constitution”.  This is not only a flagrant interference in the internal affairs of a sovereign nation but is also factually incorrect.  Article 347 and 348 of the Bolivarian Constitution clearly outlines its legitimacy and establishes the president’s right to convoke a National Constituent Assembly.


The Canadian government has stated that the “promotion and protection of democracy and human rights is an integral part of Canadian efforts abroad” yet when dealing with Venezuela this policy falls short. Rather than taking a principled stance and calling for an end to violence and peaceful negotiations to the conflict, the government's actions mirror those of the United States policy whose explicit intent is regime change in Venezuela.  By unconditionally supporting the Venezuelan opposition the Canadian government is contributing to the conflict by providing legitimacy to an opposition that more and more is engaged in violent acts, including deadly street barricades, setting off of explosives and the recent helicopter attack on Venezuelan government buildings.


Canada appears to have double standards when dealing with Latin America. Canada has been consistent in condemning the Venezuelan government, accusing it of violence, but at the same time is silent on state violence in Mexico, Colombia and Honduras where it has deep economic interests in the extractive sector.


It is clear from your public statements, and from Canada’s role in the OAS, that your government is complicit in the campaign to destabilize that country economically and politically, and to create conditions for a violent coup d’état. By parroting the anti-Venezuela propaganda emanating from Washington and from the right-wing elites inside that country, the government is contributing to the drive for immediate ‘regime change’, in violation of International law and Venezuela’s laws and constitutional order. In so doing, you bring great shame to Canada!


Rest assured that there are a great number of people across Canada who see through your groundless and hypocritical attacks on the Maduro government, and your feigning concern for the ‘democratic rights’ of the privileged elites who are orchestrating the violent protests and other provocations. Rather than helping “preserve social order” and “constitutional order” in Venezuela, your government’s actions are giving aid and assistance to the violent opposition seeking to achieve the exact opposite.


We [I] therefore call upon your Government to abandon its present policy towards Venezuela and instead adopt policies which serve to advance peace, social justice, and full respect for the national sovereignty of Venezuela and all countries in this hemisphere. Canada should condemn foreign intervention in Venezuela's internal affairs via the funding and training of groups and individuals seeking regime change through violence or other unconstitutional means, and support negotiations under the leadership of the Union of South American Nations (UNASUR) as the only appropriate means of achieving peace and reconciliation in Venezuela.

NOTE to other organizations and individuals
You can also sign this open letter, feel free to perform
"Copy and Paste" functions and send it directly to
Minister Freeland at: Chrystia.Freeland@parl.gc.ca