APRIL 2013 is the 5th annual Latin America & Caribbean Solidarity Month!! We intend to honour the life and achievements of President Hugo Chávez in reflecting on and building the themes for this year which are peace, justice and solidarity.

Through this initiative we aim to create places of convergence that challenge the current paradigm while exploring alternatives through reflection, discussion, debate and critical engagement. We will explore local and international issues while, at the same time, build solidarity with the social movements and progressive governments of Latin America and the Caribbean.

Sunday, April 14
ALL CELEBRATING NICOLÁS MADURO'S AND THE BOLIVARIAN REVOLUTION'S VICTORY
6:00 PM
Location TBA
Organized by: Latin American and Caribbean Solidarity Network (LACSN)
For more info contact: lacsncanada@gmail.com
Monday, April 15
SOCIAL AND POLITICAL THOUGHT ON INDIGENOUS SOLIDARITY
1:00 PM
OISE, 252 Bloor St. W., Room 5-170
Organized by: Latin American and Caribbean Solidarity Network (LACSN) with CUPE 3903 First Nations Solidarity Working Group
For more info contact: lacsncanada@gmail.com
While academy is often based on ongoing debate, community organizers often make real-time decisions. We propose to disrupt this difference. Ahead of time, panelists will share with each other a piece that embodies their idea of decolonization (quote, poem, image) and have a real time discussion of what is at stake when we define Decolonization and what needs to be taken into account in that naming process.

Michelle Bobala (MA Candidate Development Studies, York University) will address the disjuncture between the Millennium Development Goals’ (MDG) rhetoric of gender equality, implementation on the ground and the lived realities of urban Guyanese women. The MDG’s are significant, as the global framework by which the international donor community adheres, underpinned by a neoliberalizing logic.

Stacey Gomez (MA Candidate Development Studies, York University) will share the struggle of Maya women in defense of territory in San Juan Sacatepéquez, Guatemala. Since 2006, the Movement of the 12 Communities has been contesting a project entailing resource extraction and cement production, the initiative of Guatemalan company Cementos Progreso, allied with transnational capital. She will discuss the ways Maya women’s lives have changed since 2006, as well as their participation in resistance efforts. In Guatemala, mining, as well as other megaprojects are touted as forms of development, often meeting resistance from communities who contest this vision. 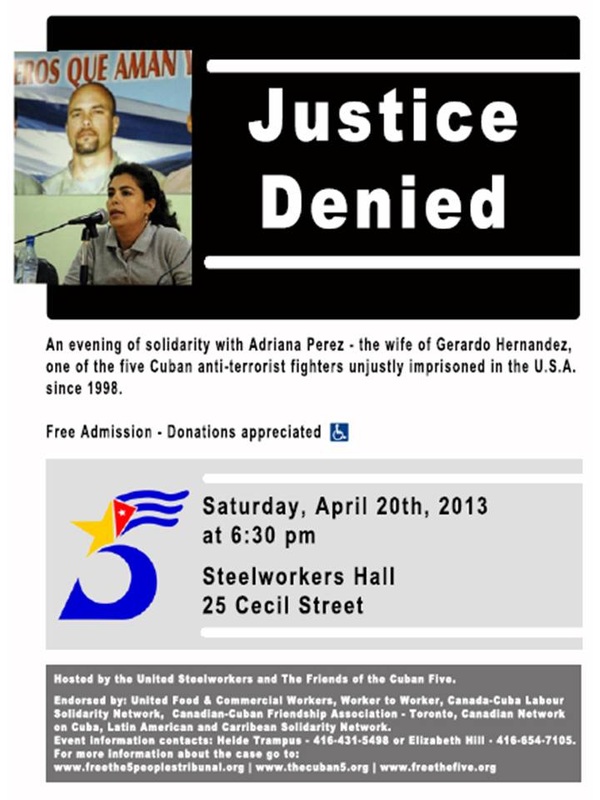 Spouse of Cuban Five prisoner to speak in Toronto, April 20, 2013

Adriana Pérez, wife of one of five Cuban intelligence officers arrested and sentenced to long prison terms in the United States for their efforts to monitor violent anti-Cuba groups in Miami, will be speaking at a special event in Toronto at the Steelworkers Hall, 25 Cecil Street, on Saturday, April 20.

Pérez is married to Gerardo Hernández, one of the men known as the Cuban Five. Sent to Florida in the mid-1990s to infiltrate anti-Castro organizations involved in a wave of terrorist activities against Cuban citizens, the five were exposed, arrested and charged with conspiracy to commit espionage. After a widely condemned trial, Hernández and the others – Ramón Labañino, René González, Antonio Guerrero Rodríguez and Fernando González – were sentenced in 1998 to excessive jail terms in difficult conditions.

Hernández was given the harshest punishment, two life terms plus 15 years. Pérez will speak about his case and the U.S. government’s continual refusal, in violation of international standards, to allow her to visit her husband. The event starts at 6:30 p.m. and admission is free.

Since their arrests a world-wide campaign to free the Five has attracted the support of international politicians and personalities, including many in Canada. The trial and sentences have been criticized by the United Nations and various human rights organizations as unjust.

The event is being hosted by the United Steelworkers and the Friends of the Cuban Five.

Free the Cuban Five, London, Ontario
Visit our website for a full listing of the events at:
http://lacsn.weebly.com/month-of-solidarity---april-2013.html